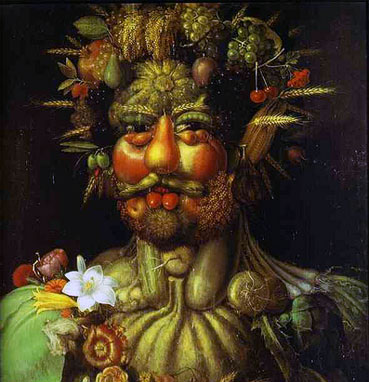 Painting by Giuseppe Arcimboldo
You are What You Eat?

Food gives us the energy to be and the rituals associated with consuming it – whether they are as simple as sitting down to a meal or as complicated as a Passover Seder – define us.  We are what we eat; but we are also defined by how we eat.  Eating is one of the things we all have in common and it has long been a topic for study.  Food preparation also defines us: making and taking time, bringing families and friends together as well as separating them.  Food is also big business and in various parts of the world – and certainly America – a hobby and “guilty pleasure”.  And food and its preparation are entertainment: from dinning at a favorite restaurant to watching a cooking program on television.  As the world grows closer and closer together – entwined in a web of influences and dependencies -- we can look to the discovery of the New World as a continuing example of the first globalization.  What is referred to as the Columbian Exchange – the trading and cross fertilization of life and disease between the Old and New Worlds – continues to change the planet.  Early on it had dramatic effect: from population growth to war and famine.  Potatoes and corn have spread to feed millions and millions of people and Italian food wouldn’t be the same without the tomato.  Today more than ever, but only because of the scope of human habitation and the reach of our technology, we have reasons to be concerned for the food supply as for as for what we eat.  Food is fun; but it’s a very serious economic, environmental, cultural, demographic, scientific, social, and political topic.

“Tell me what you eat and I will tell you what you are.”  You can understand this on a variety of levels.  One level of understanding, of course, might be quite literal.  For instance, a mother might point to a newborn child and proclaim, “Made with beans” or, perhaps, “Made with beef.”  Or a keen observer might note that because your favorite foods are Italian you have some degree of Italian ethnicity.  In today’s world, especially, both conclusions might generally be incorrect, since Americans customarily eat a varied and non-exclusionary array of foods and ethnicity, alone, does not control food choices.

“Tell me what you eat and I will tell you what you are.”  The phrase is believed to have been first been used by Jean Anthelme Brillat-Savarin (1755-1826).  A great lover of cheeses, he is also credited with writing: “A desert without cheese is like a beautiful woman with only one eye.”  Brillat-Savarin is considered by some to be the father of the low-carbohydrate diet.  He believed obesity was caused by sugar and flour and that a meat diet kept one thin as did a vegetarian diet until the inactivity of old age took control.  The phrase’s form used by philosopher and theologian Ludwig Andreas Feuerbach (1804-1872), in his Principles of the Philosophy of the Future (1843), is more famous: "Der Mensch ist, was er ißt” “Man is what he eats.”   Feuerbach saw food as having ethical and political importance.  In 1850 he wrote: “Food becomes blood, blood becomes heart and brain, thoughts and mind-stuff.  Human faire is the foundation of human culture and thought.  Would you improve a nation?  Give it, instead of declamations against sin, better food.” The phrase has been popularized since then and is now a favorite with healthy eating advocates.  Feuerbach was a vegetarian.  He recommended beans as a cheap substitute for meat and argued that the revolutions of 1848 failed in Europe because of the poor energy reserves of the masses.  He was also an atheist and a materialist.

So how about this portrait?  There are many of these composites.  Well, there’s no evidence this man ate exclusively the foods used to create his portrait.  It’s interesting, nonetheless, and it features things common in Europe at the time of its creation.   The artist is Giuseppe Arcimboldo (1527-1593).  He became the court portraitist in 1562 to Ferdinand I at the Habsburg court in Vienna and then, to Maximilian II and his son Rudolf II in Prague.

To learn more about Arcimboldo and his portraits, visit the Smithsonian.com article Arcimboldo's Feast for the Eyes and be sure to watch the associated video.  See also:  Sylvia Ferino-Pagden, ed., Arcimboldo, 1526-1593 (Milan: Skira, 2007) and Thomas DaCosta Kaufmann, Arcimboldo: Visual Jokes, Natural History, and Still-Life Painting (Chicago: University of Chicago Press, 2009).  For the former: Lockwood Library ND623.A7A4 2007.  Consult the catalog for availability for the latter