Indexes to U.S. topographic maps show map users the various map series, special maps, and map byproducts produced and distributed by the U.S Geological Survey and to assist users in selecting and purchasing maps. The index identifies quadrangle areas by map name and scale. A map is usually named after the most prominent city, town or natural landmark shown on it.

Topographic map indexes are located at the last table in the Map Room (next to restrooms). There is one index for each state, as well as indexed for the Canadian topo maps. Below are facsimiles of indexes for various maps in the collection, especially for New York State 7.5 minute series (1:24,000).

Some commercial map distributors have U.S. states index maps online (another link to an index site). Use these for fast searches. 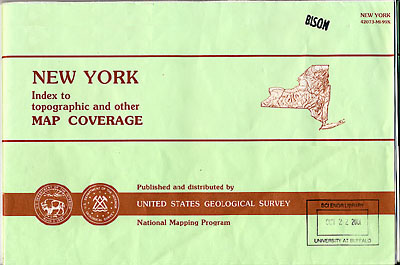 USGS topographic map indexes are located at the first table in the Map Room. Each state has an index. At the left is a facsimile of the cover of the New York topo map index.

USGS topo-quads circulate. Find the right map by using the indexes. For New York and Pennsylvania, you can also search the Libraries' Catalog, the UB Libraries Catalog by title or by county (e.g., s = erie county n y--maps topographic).

1:24,000 Digital Raster Quadrangles Index Map (7.5 Minute Quadrangles) (New York State GIS Clearinghouse). Used to locate raster images and GIS data for quads but is useful for selecting paper maps as well (Click on quad location to obtain the quad name (for locating in drawer). You can view the entire state list by Quad Name, and can view map metadata (e.g., year of coverage, coordinates, etc.), and can download image files of each quad in low-res gif (2 gif versions for each quad), or in a zipped file that includes for each TIFF image internal GeoTIFF georegistration, a MapInfo format table file (.tab), and an ESRI format world file (.tfw).

Use this index to locate New York topo maps in the UB Map Collection. You may also search in the Libraries' Catalog for New York and Pennsylvania topographic maps by title, county, and other features.

For pre-1950 maps (1:63,360) referred to as "Historic Topos", there is a map index, which also allows downloading of digitized versions of the originals. 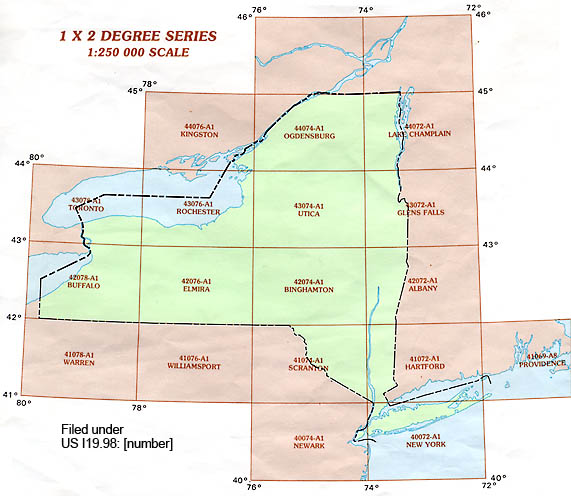 New York State 1:250,000 scale maps are in the Eastern United States 1:250,000 series, one of a number of map series produced by the U.S. Government. These can be identified in the Libraries' Catalog by title and are shelved in the Map Room under Government Documents (SuDoc) number. The Map Collection has maps in this series for a number of states, and this series is part of a world-wide series of maps of the same scale. Click on the image at left to see the New York index. For example the title: Buffalo is located under: US I 19.110: 42078-A 1-TF-250/ 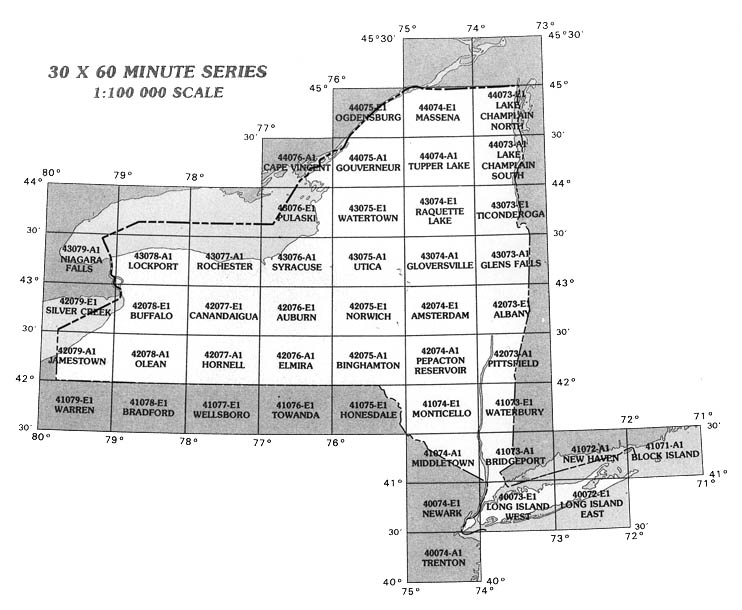 Index Maps to AMS and GSGS Maps. Collection of scanned Index maps to Army Map Service and GSGS (Great Britain. War Office. General Staff Geographical Section) map series. These indexes show maps in the UC Berkeley collection but they can be used to locate similar maps in the UB Map Collection. First use the Libraries' Catalog to search for these maps. 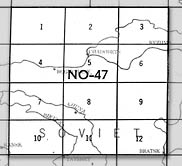 Army Map Service (AMS) Map Series maps (World). Each region has an index map and digitized facsimiles of some of the maps in each series. (index at UT-Austin Library).

Army Map Service 1:250,000 Scale Topographic Maps of the United States. UB has most of these maps in its collection, see the Libraries' Catalog for access. The link above is an index of all maps in the series. Click here for Alaska. (index at UT-Austin Library).

Use the Libraries' Catalog to search for maps in the UB Map Collection first, then refer to these. You can search for these maps by title, country, by district, province, or state (in some cases), and other features. 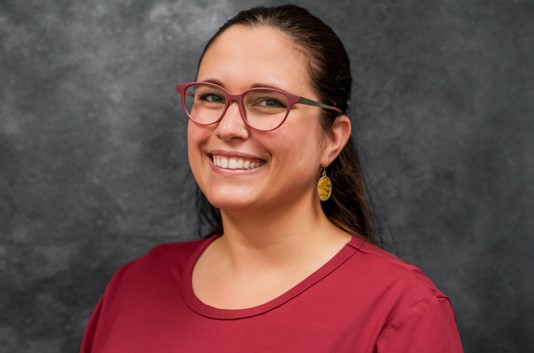